As Kalmyk, Tuva and Buryat Mongol ethnicities of the Russia came to Mongolia in large numbers fleeing the Russian military mobilization, long lines and queues formed at Altanbulag port in Ulan-Ude. There are reports that young men of military age are about to be banned from leaving the border.

According to the The General Authority for Border Protection, 5,001 Russian citizens have entered the border with Russia through the Altanbulag port in the last 10 days.

Also, let's call on Mongolians not to spread false information about the recent Buryat citizen's possible attack on the body of a Mongolian citizen due to one person's mistake! All the Buryats who entered Mongolia are very worried and talk about collecting donations for the victims.

Mongolia does not have reciprocal visas between the two countries, so it is possible to work and study in Mongolia by changing the visa, but as the refugee problem has become clear, Mongolians need to be organized, especially young people of Mongolian descent, to help them find their place in Mongolia. Once our president of the federation said "Mongolia is the homeland of all Mongols".

Calling all Mongolians to help our Mongols in difficult times, considering it a noble human duty for us independent Mongolia.

President of  the The World Mongol Federation (WMF) Ts. Elbegdorj made a statement to the public about the current situation, President Putin and those fleeing from Russia, including Buryat, Tuva, and Kalmyk Mongol brothers who are being mobilized by force, the people of Ukraine, President Zelensky and the world. The announcement received worldwide attention, with CNN, DW and public figures continuing to highlight it.

Statements are still coming from associations and organizations of Buryats in abroad, asking the Mongolian brothers to help and support them.

Due to the fact that the ethnic minorities of the Russian Federation, especially the Mongols of Kalmyk, Tuva, and Buryat, are heavily affected by the mobilization, young men of military age have gone to neighboring countries.

Specifically from the public:

Ts. Elbegdorj, the President of the World Mongol Federation, called on his Twitter page to warmly welcome our fellow Mongols:

"Mongols from Buryat, Kalmyk and Tuva are coming to Mongolia more and more. Welcome with open arms. World Mongols, independent Mongolia. This is the precious heritage of every Mongols. Every Mongol is a motherland to another Mongol." 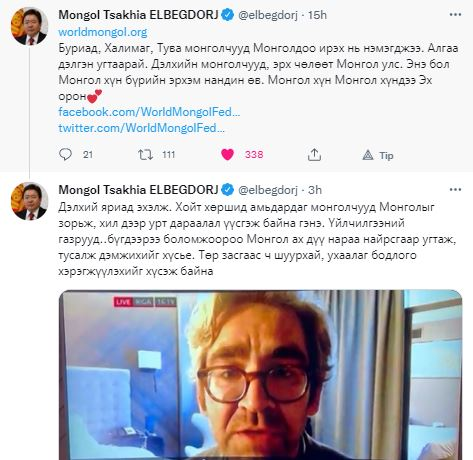 Of course, there are many issues to consider

B. Tsenddoo: Think about that Russia may send troops in the name of searching for military fugitives, like when the Red Army entered in the name of liberating White Russians, and think about what to do if they illegally cross the border if the Buryats are not able to come to Mongolia.

P. Naranbayar: Mongolia is faced with the problem of refugees. Although not considered an outright refugee at this time, time will show off. What if Putin demands a rollback? This will be a matter of the Constitution of Mongolia. It is important to reflect on many aspects.

Khariad: There is a UN Refugee Convention. There is a principle that people have the right to be free from fear. We should assign the status of "Asylum seeker" to those fleeing from Russia. There is a precedent that other countries concentrate in one place. Are we ready?

It is right to accept Russian refugees and Mongols in Mongolia. People's initiatives have started to appear in the online environment to welcome and support Russian refugees and Mongols, to get organized and do certain things. There are many things we can do to help them settle in Mongolia, provide further employment, training, and access to relevant human rights organizations. From the beginning, there were job ads.

Job ads are collected and integrated into the World Mongol Federation page and Twitter.

Although there are citizens who want to provide jobs, if only 5% can be foreign workers, then they cannot hire more than 1 person in a job with 10 people, preferably 50% of the salary will be paid to the state. What are the procedures for taxes and health insurance? It is necessary to pay attention to problems such as the small number of people who speak Russian.

Here are screenshots of the public's position in cyberspace:

A few Buryat youths who had managed to cross the border last night were welcomed to our hotel in Sukhbaatar. We must help them escape the war and live in freedom. 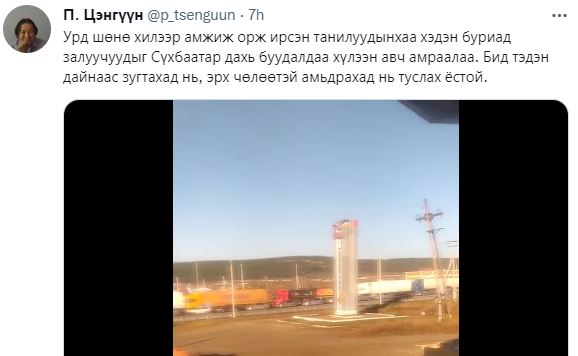 Is there a historical opportunity to welcome our fellow Mongols and give them citizenship and increase our population and contribute to development?

Buryats were loaded from 02:00 am the night before. People over the age of 60 and people who are not registered in the military reserve were also transported. Relatively few people from Irkutsk were mobilized. Buryat towns and villages are crying. I want to help them even small. 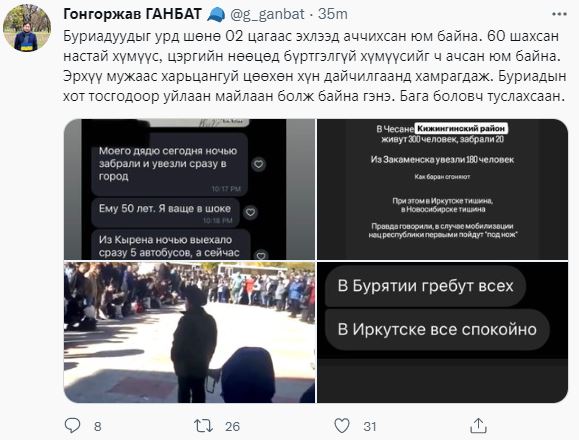 You can contact Otgonbayar Jadambaa address to help with the activities they are organizing:

He is working to organize meetings and do specific activities, and on his page:
I met more than 150 Buryat brothers and sisters. Contact the following people? Fortunately, there is a shortage of 200,000 jobs in Mongolia.
#Announcement

If you are looking to hire a Russian speaker

If there are jobs to be placed

If there is an employment agency, (Of course, volunteer to help)
It is the responsibility of Mongolia to ensure the safety of these citizens.
Some of them came with their families and saw a lot of young people with babies. Therefore, I gave advice on how to get health services.
See later that by helping these guys, we will keep the name of Democratic country high.
Don't promote war, if you don't follow the laws of Mongolia, there is a law that will issue you immediately. Please don't forget our help when you return to your homeland in peacetime.
Clauses 27.1 and 27.5 of the Law on the Legal Status of Foreign Nationals may extend the visa after 30 days for the following reasons:
Studying, Employment, Immigration, with this provision, Mongolia can extend a VISA and work within the framework of Mongolian law.
Note: I think that their information and names should be kept secret if they don't post a picture of their face. 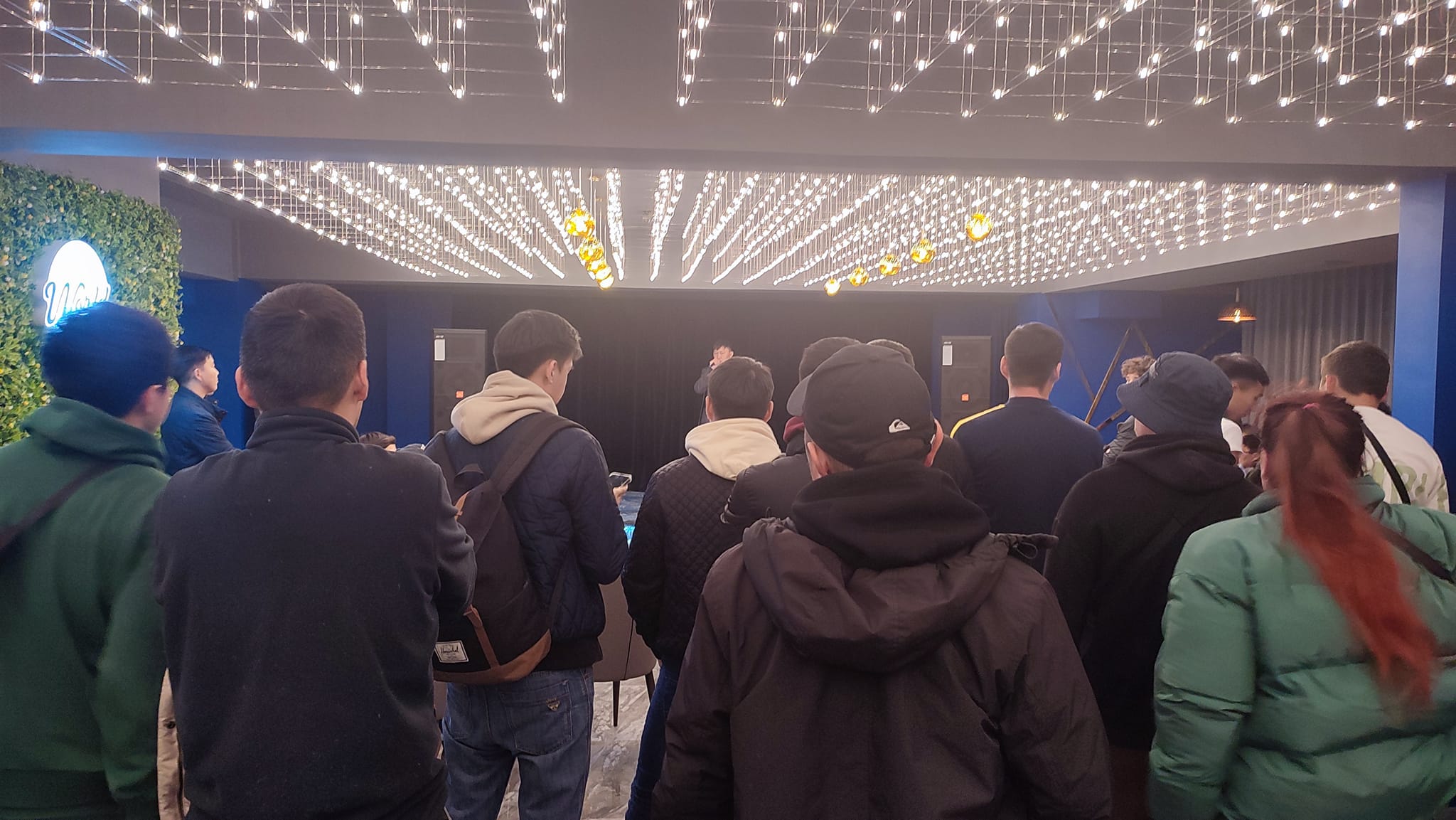 Right now, young people with Russian license plates are keep entering the border of Mongolia. 4-5 person sat down. The procession of Buryats and Russian military servicemen who say they will not kill people with guns has just begun. 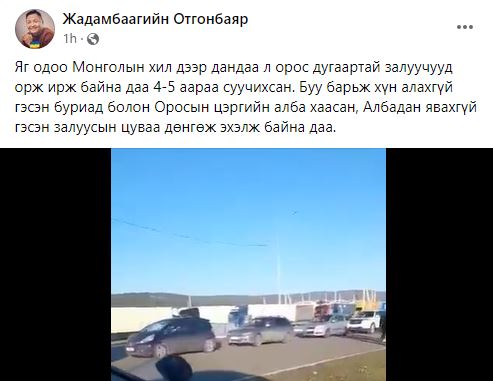 We have 2 buryats sleeping. They came in the clothes they were wearing. They ran away from the border and their mother crying and asking a help in Mongolian. What to do now?

Knock on the door of Yakut, Tuva, Buryat, Chechnya and ask for 2 options.

All Buryat soldiers who entered Mongolia wanted to survive. If we return them, we are no different from murderers. 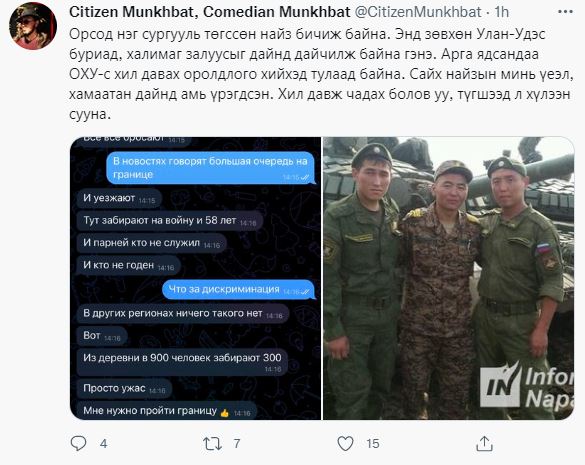 Enkhsaikhan Mendsaikhan \Former PM of Mongolia\: The Mongolian government should take its patronage and cooperate with the United Nations Refugee Agency. They will come in thousands. Show them a good neighbor.

G.Ganbat: The Kyakhta Telegram channel, which writes about Kyakhta, reported that a large number of people gathered and queued at the checkpoint on the border of Russia's Buryat with Mongolia. The number of people leaving Russia for Mongolia is increasing rapidly. It is starting.

Students will not be included in military mobilization. Therefore, the way to escape from mobilization is to have student status. Thousands of young Russians, Buryats and Tuvans are registered in UB's private universities. Buryat, Kalmyk and Tuva youth should be given more opportunities.

It is only a matter of time before Putin's regime is defeated in Ukraine, and until then it is here. I wish the schools that received the fees would at least teach Mongolian.

Tuvshin: A convoy of young people who fled the military draft formed on Kyakhta. What if we look them as the labor force? We want to have more tourists, so this is what we want. They will bring income to all sectors, such as hotels, food, and goods. The negative side should be avoided. 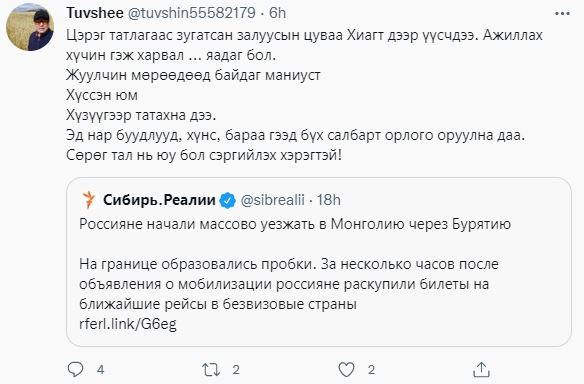 V.Enkhtamir: I would like to have a Mongolian green card for Buryat, Kalmyk citizens. Also, we can give some livestock to them.

Tayar: The Buryats are forcibly loaded. Young people are constantly asking how to get to Mongolia. 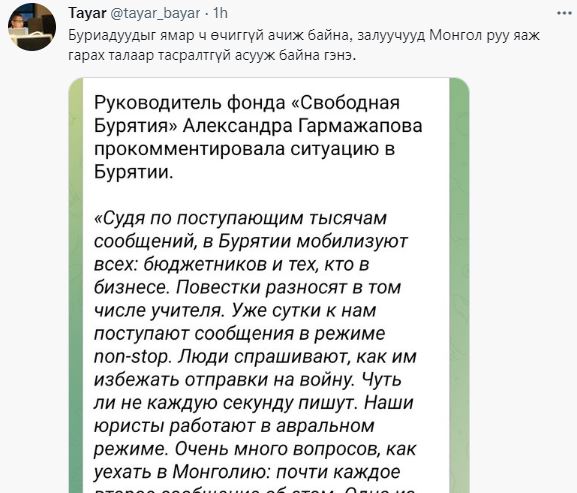 Ts.Oyungerel: The Buryats weren't able to enter Mongolia. I am afraid that either side will close the border. It is said that men are being loaded regardless of age and military exemption status.

Open annual Mongolian and English language courses and teach them to Buryats. If you keep them in training, you can keep them out of the war without having to extend their visas.

Ts.Uyanga: First, We need to organize a training course to help the Buryats who have entered. Mongolian language, history of Mongolia, laws of Mongolia, etc. They don't even know who they are. 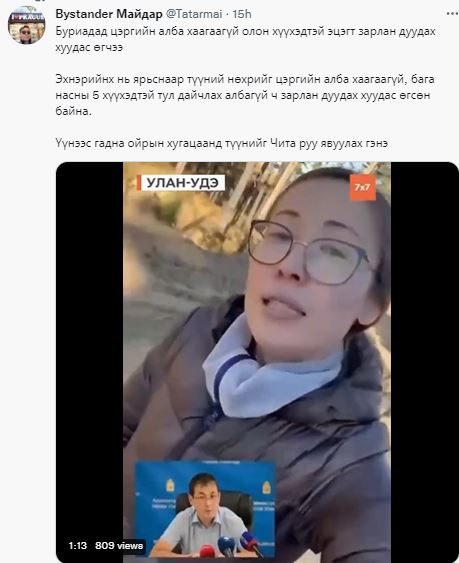 Wikibilig.mn: Our poor Kalmyks are trying to flee to Central Asian countries after mobilization.

Aldar: Police and National Guard immediately took the students away from Ulan-Ude University classes. Buryads have gone to war in large numbers before. I want them to take a break. 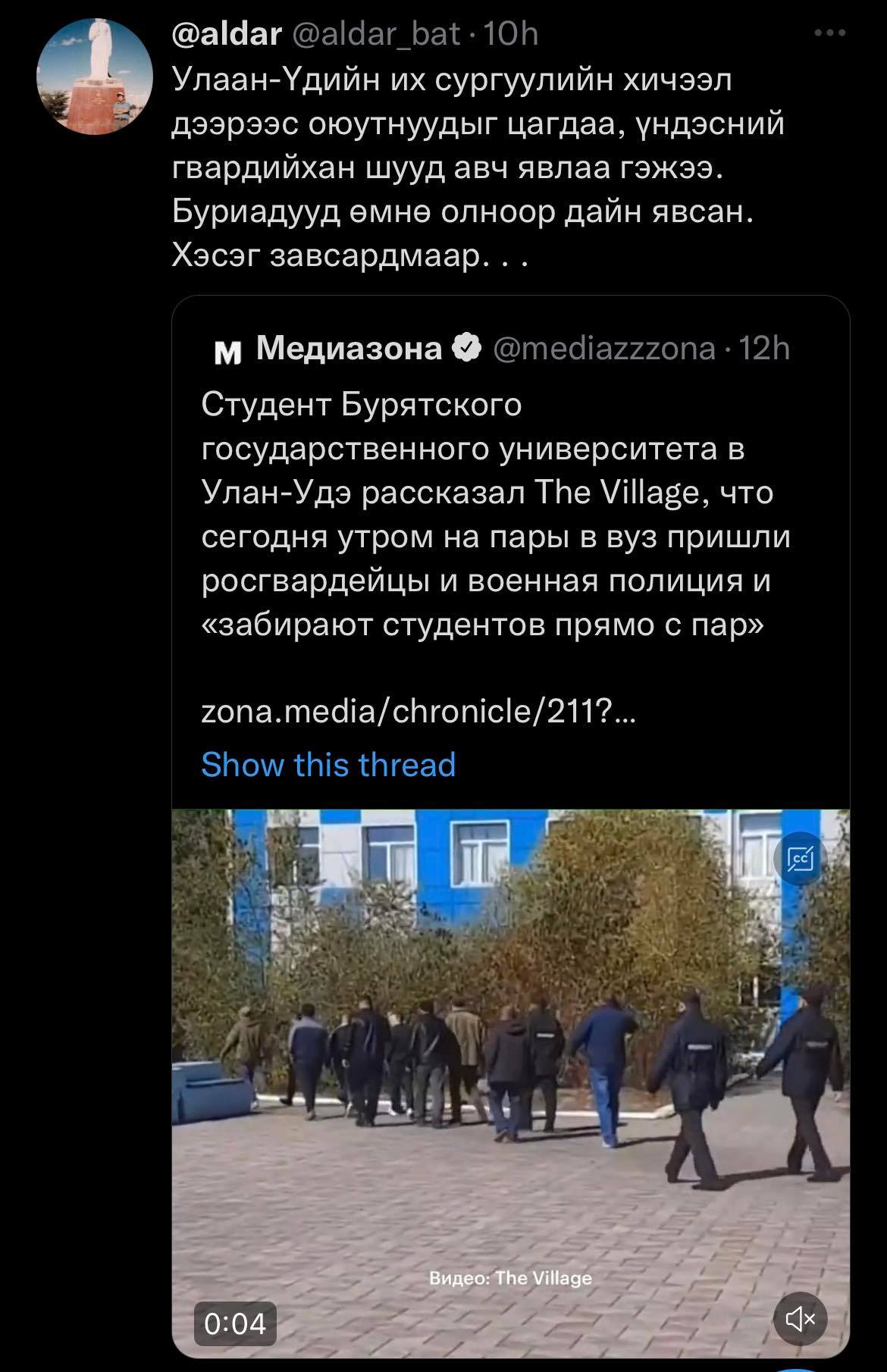