The works of Misda, (art name Surna Celluloid) a young artist from Southern Mongolia, who were able to fully express the tone of the "Mother Language Movement" in 2020 through art and draw the public's attention.

The struggle for the mother tongue (Mongolian Language) has become a global movement that is worthy of attention as it was a struggle that all employees, students, teachers, lawyers, journalists, ordinary herdsmen from all levels of Southern Mongolia were able to fight together.

Here are her digital works. 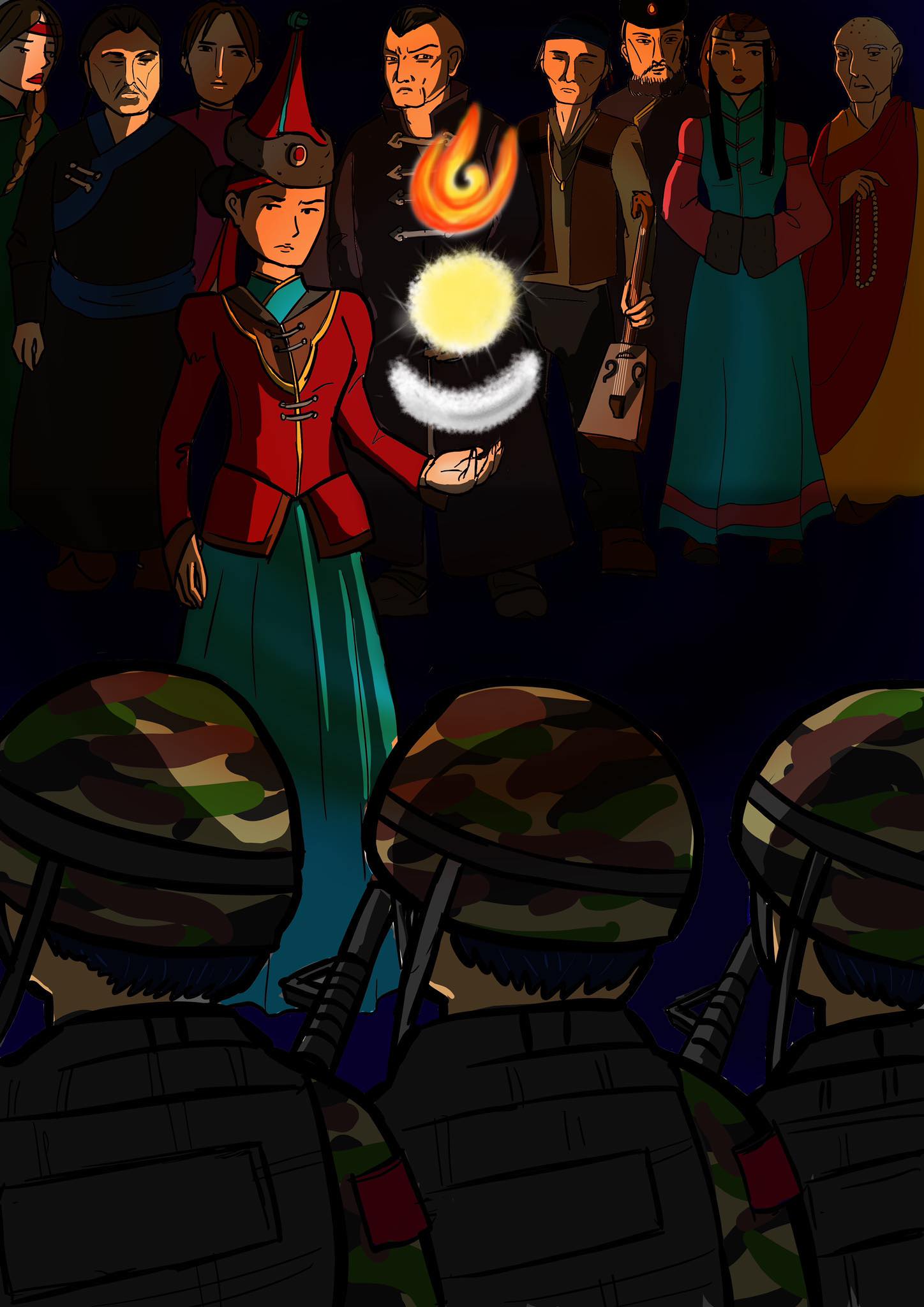 The picture "Mongolian girl with her mouth closed" shows that Mongolians are no longer free to speak their mother tongue, to speak and express their opinions. 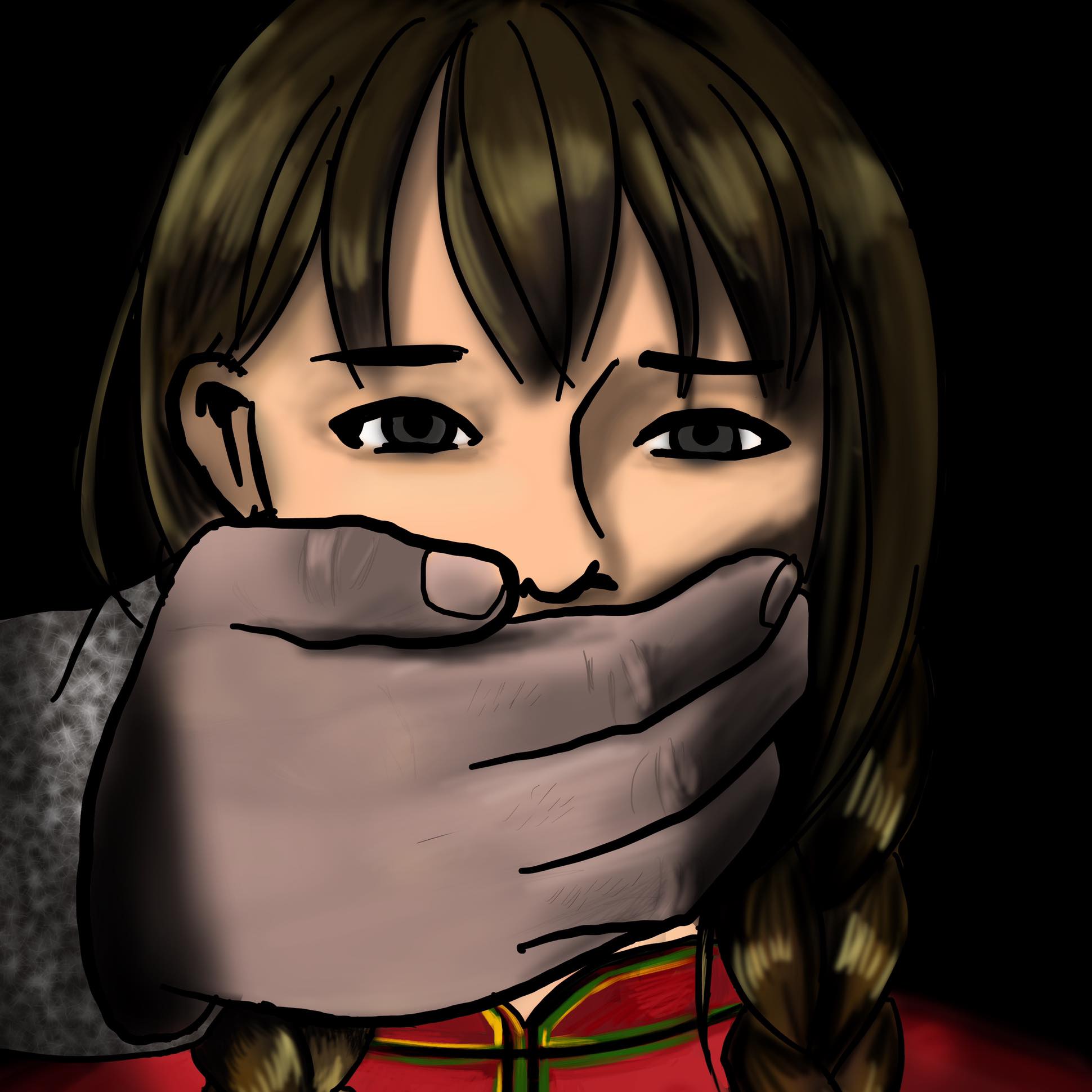 There is no one who does not know about Surnaa, a brave girl who sacrificed her golden life for the struggle of her native Mongolian language. Her portrait is depicted. 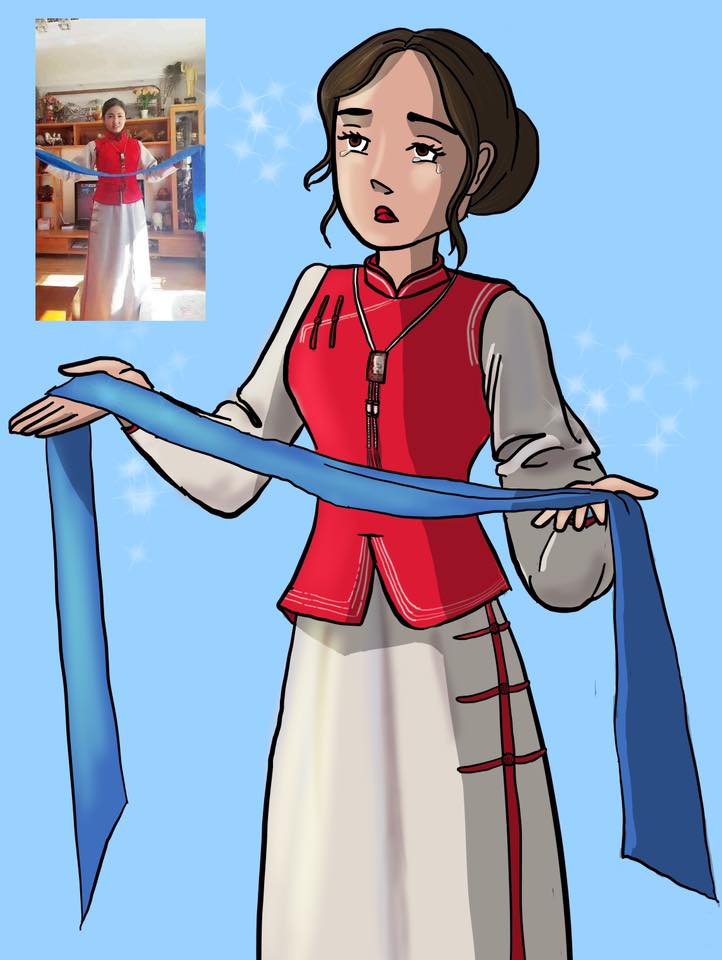 This picture called "We must learn our native tongue" encourages every Mongolian family to make an effort to educate their children in their mother tongue, even though there is a lack of learning opportunities in Southern Mongolia. 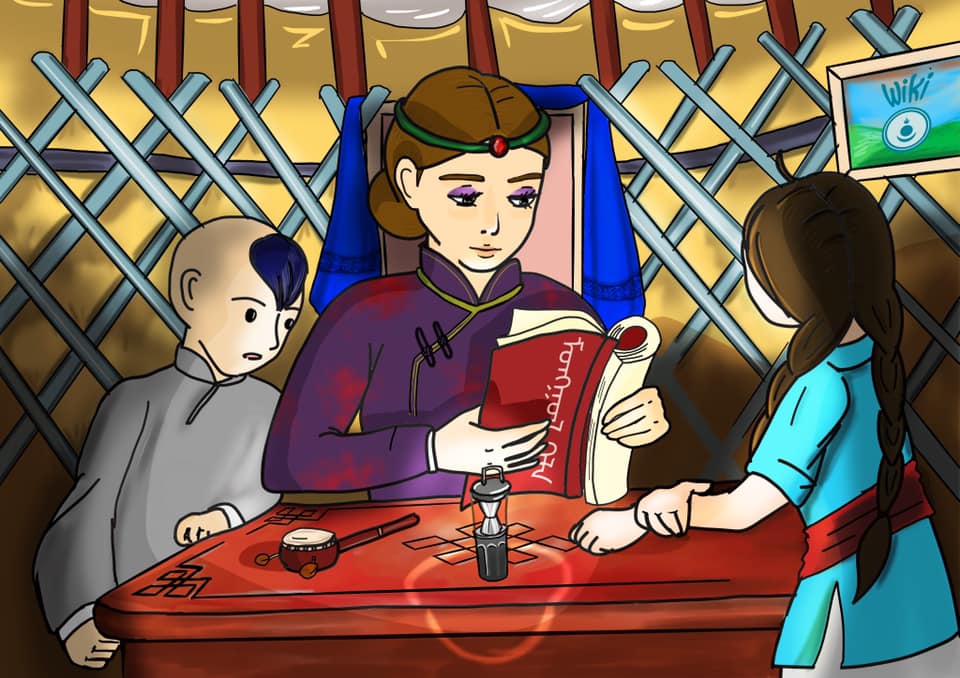 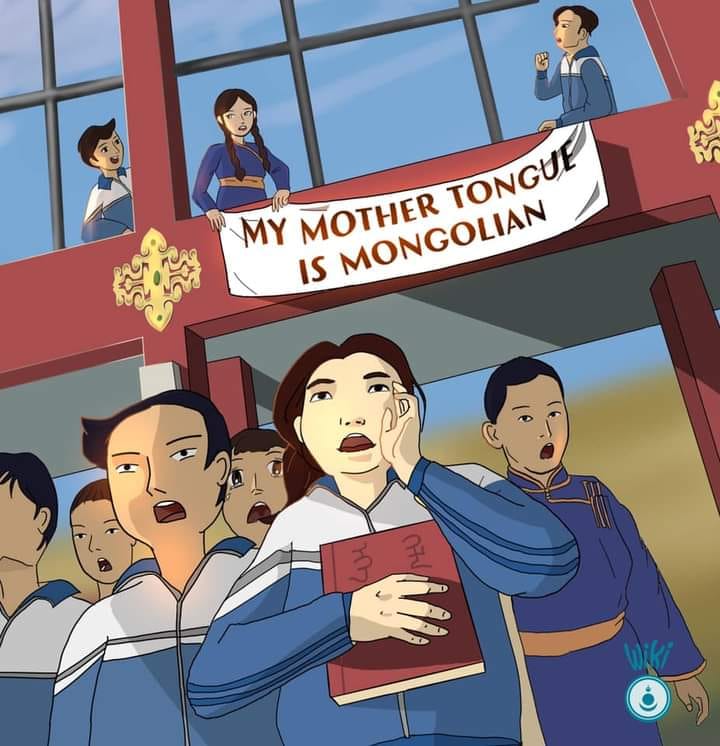 “My mother tongue is Mongolian” 南蒙古勇敢的孩子们 By Surna Celluloid, 2021

This picture "Together with us" expresses that we ordinary Mongolians need the support of the world because we have few manpower. 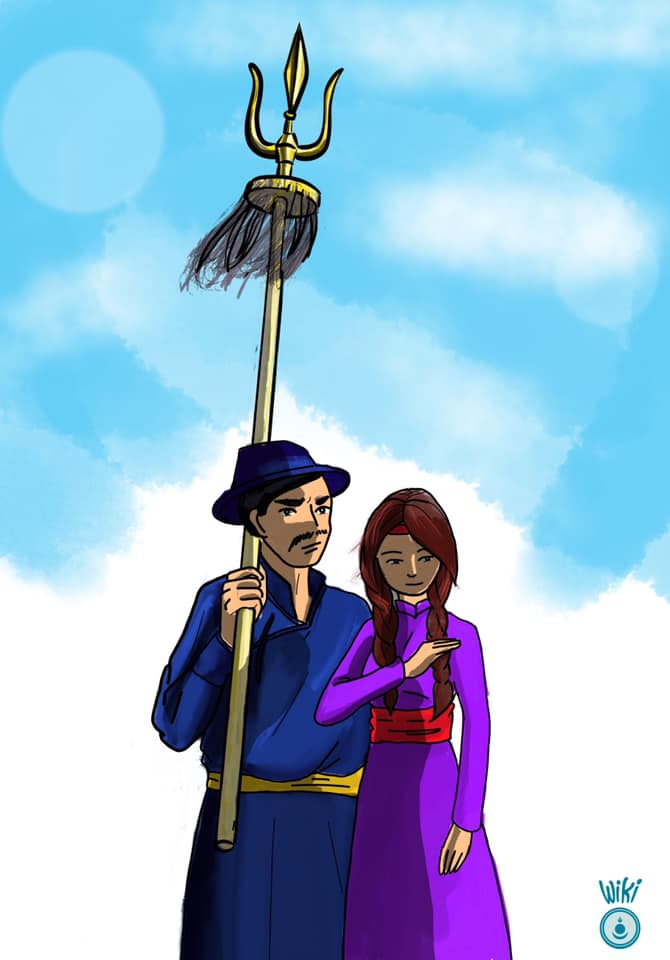 Ashidaa, musician from Ordos, was banned due to his participation in the protests and was sentenced to 5 years in prison at the time, and his family was also banned from seeing him. 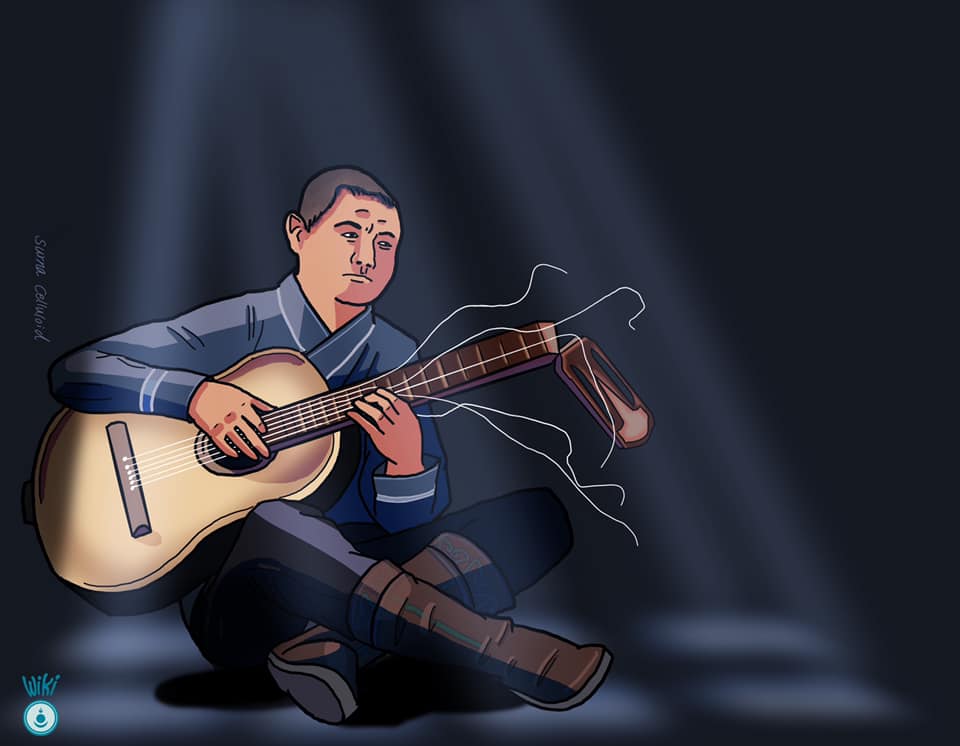 Mr. Ashidaa, a musician and composer from the Ordos region, is under detention pending a possible 5 years of imprisonment for his active participation in the protest. Family members have been denied the right to visit him in the local detention center. [Original Text from SMHRIC, Art by Surna Celluloid] https://twitter.com/tsai1633/status/1325419812873330691?s=21

The picture "Former Principal of Ereen City Elementary School" depicts the female principal who sacrificed her life for her mother tongue along with the symbols of Southern Mongolians. 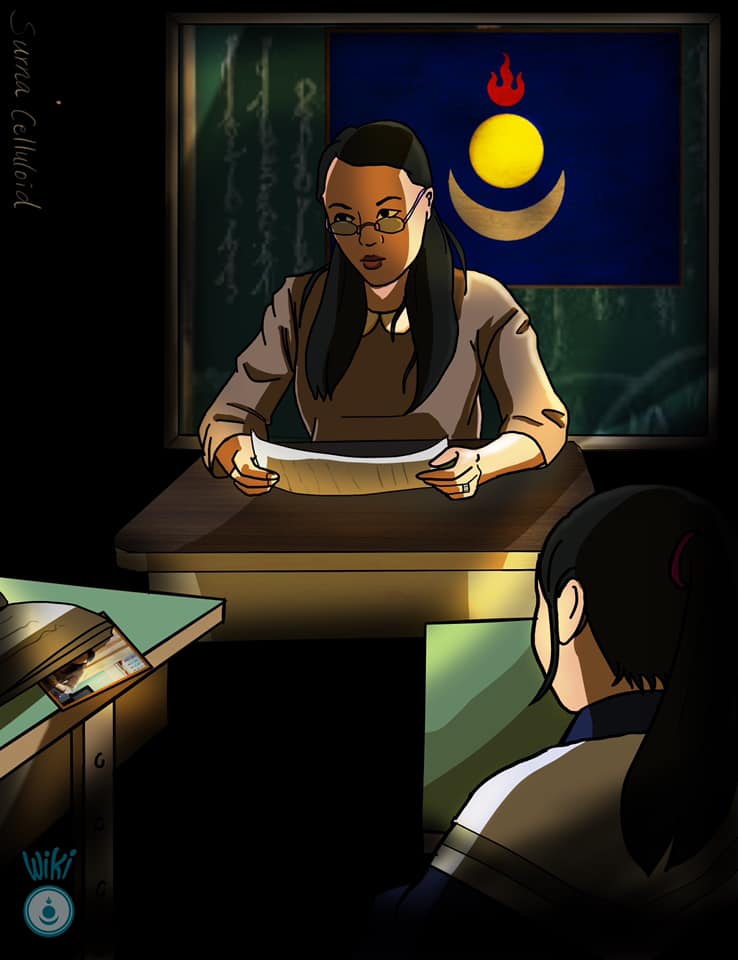 The Southern Mongolians in Sweden have been very active in the struggle for the Mongolian language movement and have raised awareness in public, contributing to the fact that the issue became an important event in Europe. However, the immigrants of Southern Mongolia were facing the risks of deportation. If deported in this way, there is a risk of many human rights violations, such as being punished or tortured for participating in political demonstrations against the country's government or government in a foreign country. One of them was a young Mongolian family with an Southern Mongolian husband and 2 children. The head of the family, Bulga, faced the threat of being returned to China, and there were many calls to protect him. Due to his struggle for human rights, Bulga was persecuted by the Chinese authorities, and 10 years ago he fled from the Inner Mongolia Autonomous Region to Sweden. From the moment he arrived in Sweden, the authorities of this country refused to grant him asylum and ordered him to be deported. His family situation and the human rights situation reflected in the pictures. 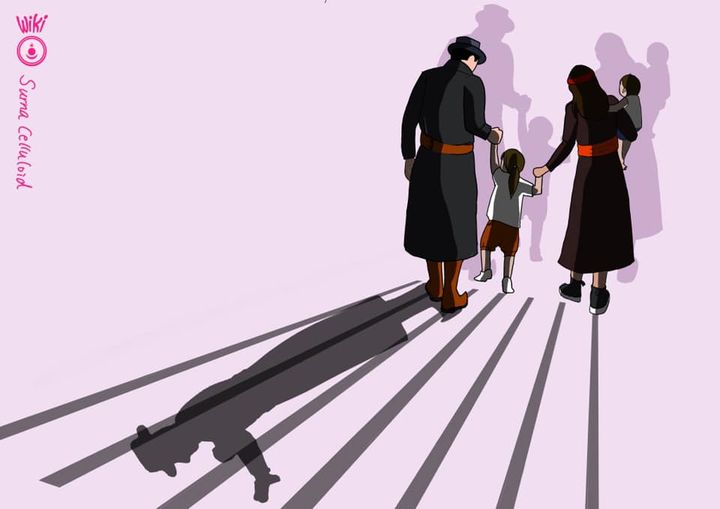 The fate of a Mongolian family: Their visa was denied, and two preschool children may grow up in an environment without a father because their father is from South Mongolia...

#stopdeportingbaoligewurina Will #Sweden be responsible if baolige disappears in China?

In addition to the struggle for the mother tongue, one event that caused the frustration of Mongolians and the world was that the History Museum of Nantes, France,  in collaboration with the Inner Mongolia Museum in Hohhot, China, was preparing to release an exhibition about Chinggis Khan called "Son of heaven and the steppes - Chinggis Khan and the birth of the Mongol empire", but The Chinese government has stipulated that the words "Mongolian Empire" and "Chinggis Khan" should not be used at all, that the content of the exhibition must be controlled by the Chinese side, and that the stories, maps, and texts about the Mongolian Empire be re-edited by the Beijing Heritage and Culture Office and created in their own way. The exhibition was postponed until 2024, and the painting is described in this way in recognition of the support of the French side at that time. 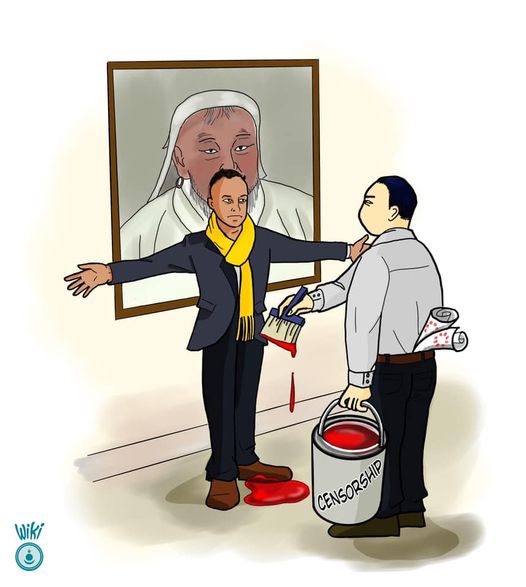 The Nantes History Museum in France announced on Monday that it has decided to cancel its longstanding partnership with a Chinese museum after the latter attempted to rewrite Mongolian history and culture in an upcoming collaborative Genghis Khan exhibition.

Misda, a young artist, painted a portrait of herself building a ger. 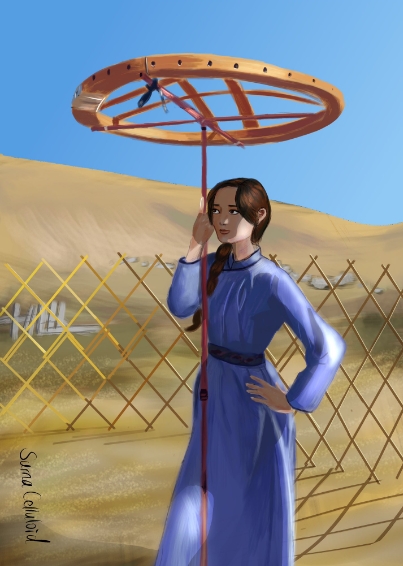 Honored Artist of Buryatia Zorikto Dorzhiev is an artist, graphic designer, sculptor, film director, and is rightly included among the ...

END_OF_DOCUMENT_TOKEN_TO_BE_REPLACED

Art of World Mongols: The paintings by Khairkhan, an artist from Southern Mongolia, express the existence of Mongolian traditional life

Expressing one's social problems through art and spreading an idea to the public is a classical method of influence, such as expr...