Munkhbayar Ch's open letter: Wake up, Mongolians, if you don't want to be wiped out!

Since February 17th, journalist, writer, human rights defender, and citizen of the independent country of Mongolia Mr. Munkhbayar Chuluundorj has been under extrajudicial detention in Ulaanbaatar, the capital of Mongolia, for “engaging in spying activities against the People’s Republic of China.” The following is an English translation of his open letter to all Mongolians:

Wake up, Mongolians, if you don't want to be wiped out!

My message to all Mongolians

Nationalism has haunted me since I was 15 years old. I imagined setting up an underground organization called the “Southern Mongolian Liberation Front” to recover the Mongolian people from the devastating impact of the unequal treaties that China was a major party to and to restore the united Mongolian nation.

At the age of 53, I, as a citizen of the independent country of Mongolia, spoke and fought for the rights of my mother tongue and fellow Mongolians. For this, I have been accused of “being a foreign spy” and “engaging in activities against the People’s Republic of China” by the intelligence authorities of Mongolia and have been held in detention under the order of the Procuratorate of Mongolia. The General Intelligence Agency of Mongolia manufactured evidence and shamelessly brought a trumped-up case against me to silence me.

I have been cut off from society for more than 100 days due to the deep infiltration of defenders of the People’s Republic of China into the Mongolian state. In the 1990s, a sense of solidarity among Mongolians around the world and a general sentiment of nationalism began gaining momentum. Subsequently, in the 2000s, ideas and proposals for bettering of conditions of Mongolians worldwide were reflected in Mongolia’s national policies. Legislation such as the naturalization and equal treatment of Mongolians from outside the country, opening the door to all Mongolians to come freely to live in Mongolia permanently, was even brought into discussion by the country’s legislative bodies.

For this reason, our movement has never slowed since the protests in front of the Chinese Embassy, at the Sukhbaatar Square and Students’ Square in January 2011. As a human rights defender, I do not believe that activism for the Southern Mongolian cause poses any threat to the national interest of Mongolia. However, under the pretext of “secrecy,” Mongolian intelligence authorities are defending the interests of the People’s Republic of China and accusing me, a Mongolian citizen, of “engaging in spying activities against the People’s Republic of China.” I strongly protest this outrageous, shameless act against me by the intelligence authorities of my own country—an act carried out by China’s directive, one that has no place in an independent and sovereign country.

As a citizen of Mongolia, I, Munkhbayar Chuluundorj, have never worked for or collaborated with any intelligence agency of any foreign country. Raised with idealism and commitment to my people and nation, I solemnly declare in this open letter that I have never received a single penny from a foreign intelligence agency.

I would also like to express my utmost gratitude to those like-minded fighters and human rights defenders who encouraged, defended, and spoke for me by protesting in the streets, gathering at the squares, rallying in front of the court and intelligence agency, and informing the world of the true nature of the case via media and the Internet despite the risk of reprisal. All your support is giving me strength in my fight against all odds.

Wake up, stand up, my fellow Mongolians! Every minute, every second, our freedom to express our opinions, aspirations for a better future, and right to assemble are being taken away. We must be reminded that an immeasurable amount of our natural wealth is being plundered by those greedy traitors who wish for the destruction of our nation and shuttering of our future.

Munkhbayar Chuluundorj, a citizen of Mongolia

From Detention Center No.461 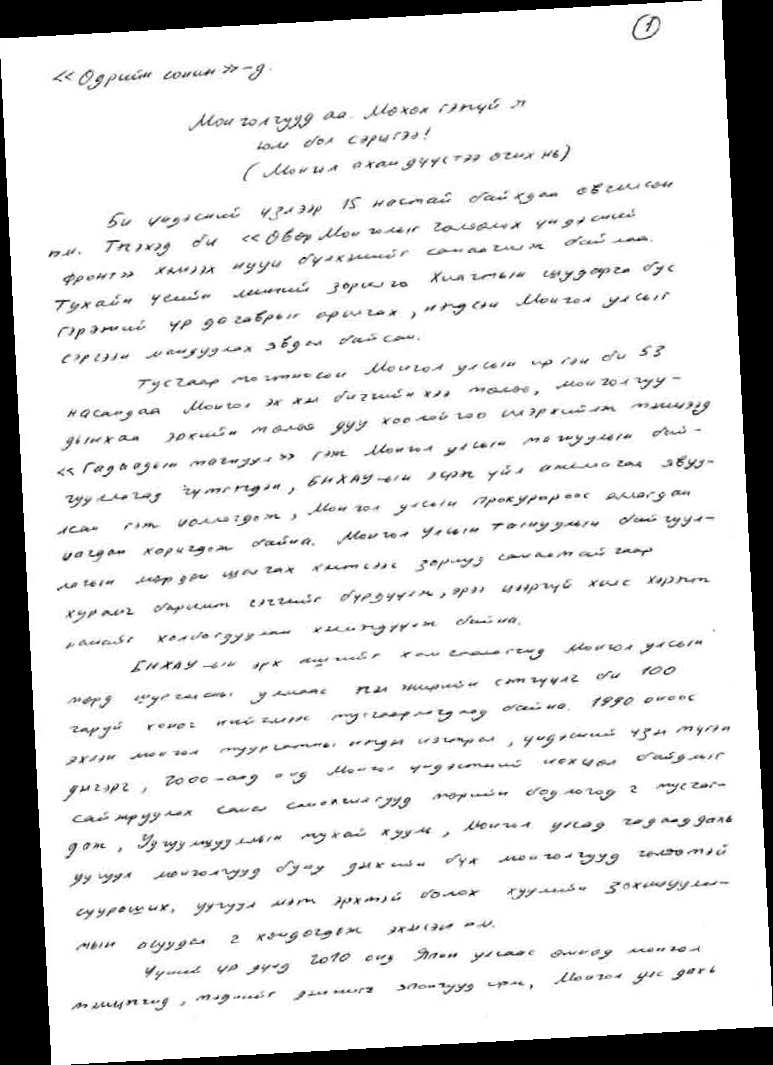 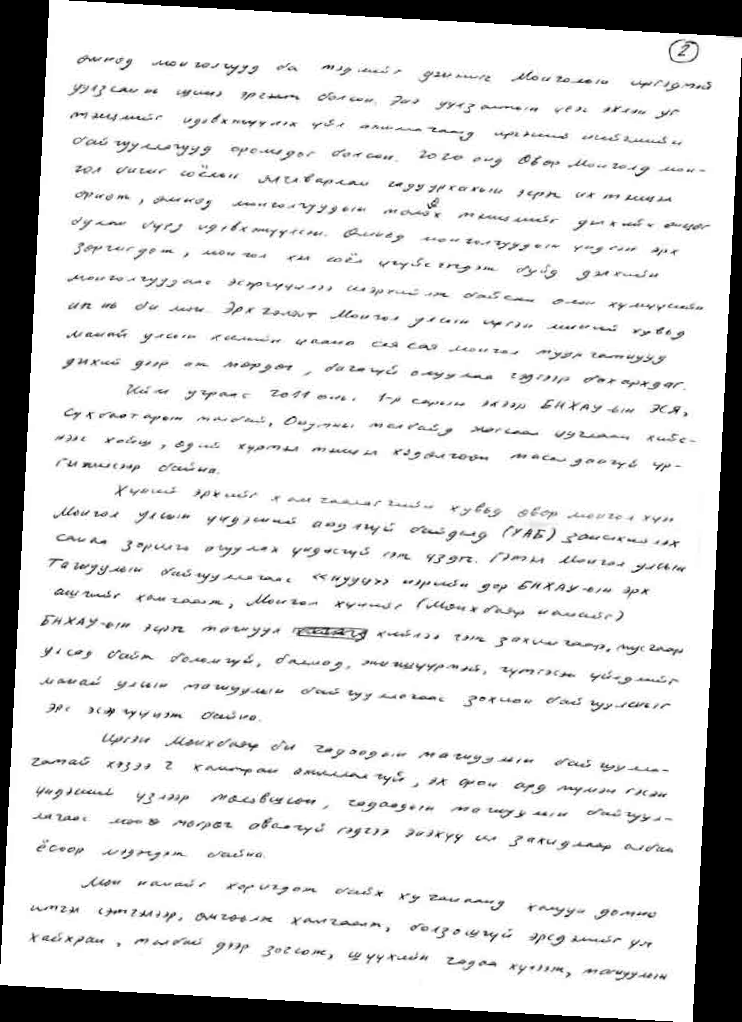 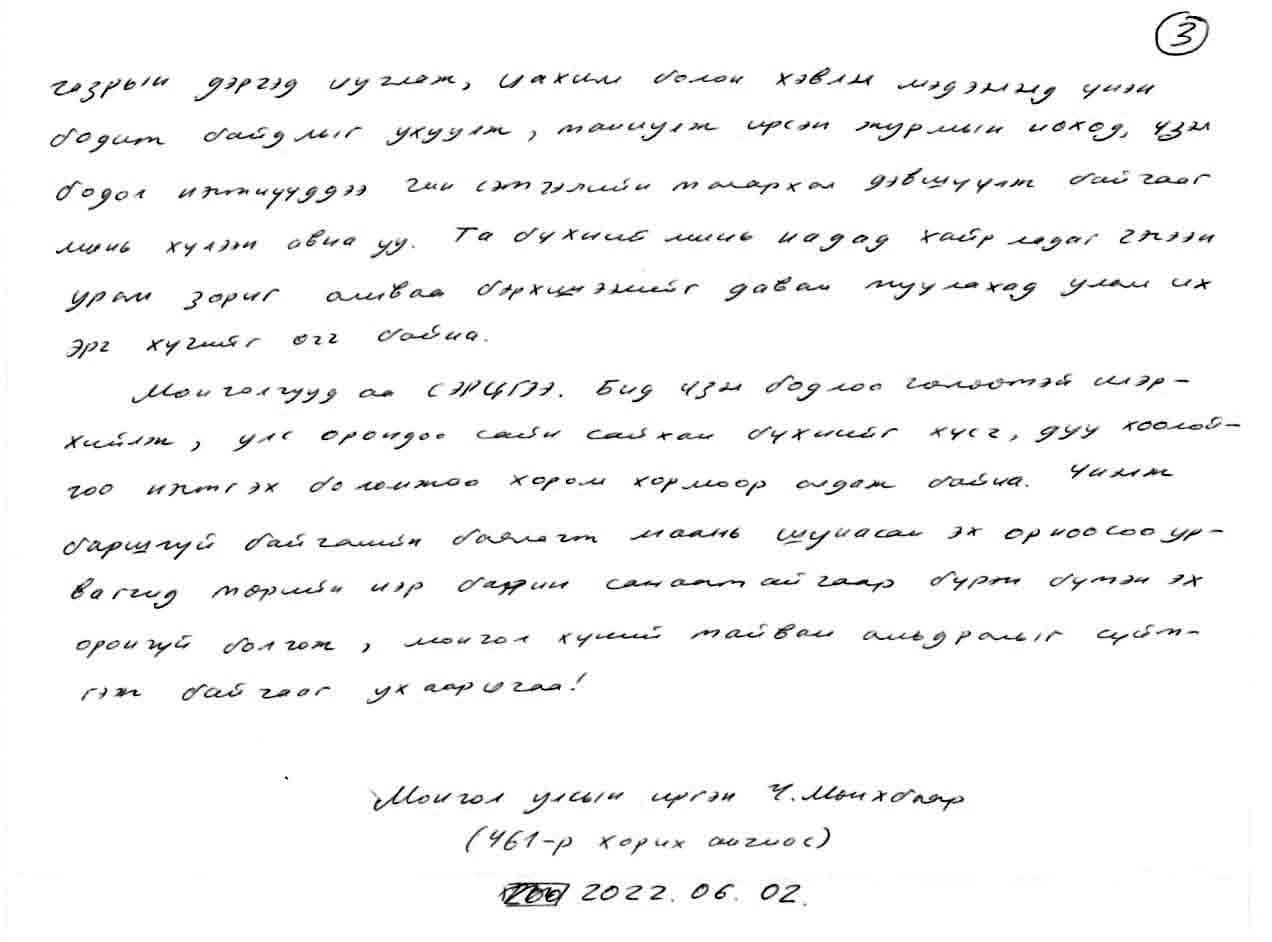