At a time when issues and criticisms surrounding the Russia-Ukraine war are ubiquitous, we are saddened by the fact that the Russians are using the so-called ethnic minorities, especially the Buryats, Kalmyks, and Tuvans, as their shields. Most of the more than 40 Russian soldiers captured in Ukraine are young men aged 17 to 20 from Tuva and Buryatia. Every Mongolian must speak out against this issue.

So here's what people saying.

"Approximately 50 out of 70 people are Buryat Mongols. The bronze heart melts." Mongols let's love Mongols\Mongol Mongoloo khairlay. Mongols are motherland to the Mongols. After all, Mongols all over the world care about Mongolia!"

"The Mongols supported Russia to the best of our ability during World War II. Now we support both the millions of Russians who oppose the war and the Ukrainians who defend their homeland. I'm opposing their use of the Mongols of Buryatia, Kalmykia and Tuva as war shield." 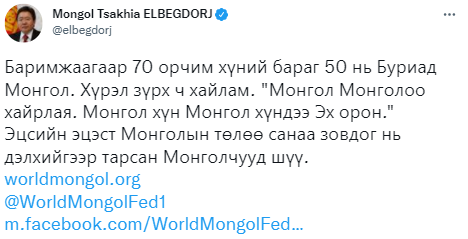 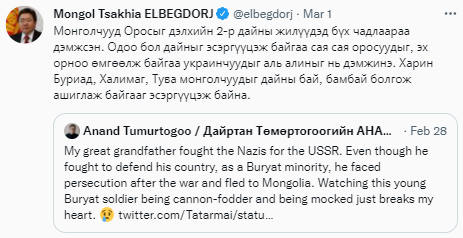 From the information of Russian units fighting in Ukraine .. where they came from: Irkutsk, Buryatia, Tuva, Khakassia, Altai, Krasnoyarsk, Omsk, Tomsk ...... It is very sad to see that the Russian authorities are putting ethnic Mongol minorities in a meat-chopper. 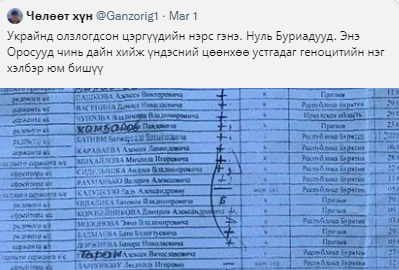 Baldan Bazarov: Many of our Buryat boys went to war. My brothers and sisters! Come back soon! Go to Ivalg Datsan and worship Itgelt Khamba and seek salvation! 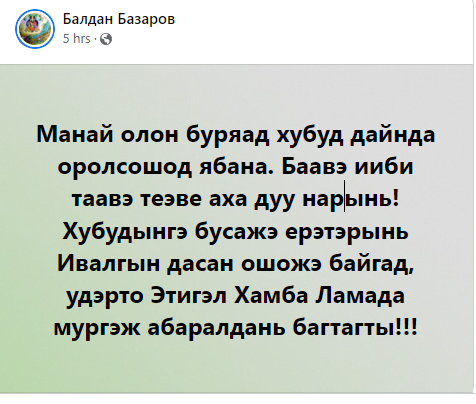 END_OF_DOCUMENT_TOKEN_TO_BE_REPLACED

The Republic of Kalmykia celebrated “National Costume Day” on September 9 and 10, according to the Ministry of Culture and Tourism. The...

END_OF_DOCUMENT_TOKEN_TO_BE_REPLACED

Honored Artist of Buryatia Zorikto Dorzhiev is an artist, graphic designer, sculptor, film director, and is rightly included among the ...

END_OF_DOCUMENT_TOKEN_TO_BE_REPLACED

The young Kalmyk, who was oppressed by Russian nationalists, decided to move to Mongolia

Young Kalmyks, who run a clothing business in the Russian market, have decided to move to Mongolia due to pressure and threats from nat...

END_OF_DOCUMENT_TOKEN_TO_BE_REPLACED

LUNAR NEW YEAR TRADITIONAL COSTUM OF THE PRESIDENT OF TUVA

The President of Tuva, Vladislav Khovalyg, and his family were dressed in Mongolian deels on the Lunar New Year. In his New Year's gree...